Airplane crashed, no one died 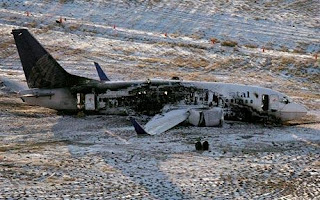 58 people were injured in the a plane crash in Denver, but no one was killed. What a luck. Denvers firemens compared to a scene from a disaster film.

The entire right side of the plane was burned, and melted plastic from overhead compartments dripped onto the seats. Investigators said the plane's left engine was ripped away along with all the landing gear.

"It was just amazing, and big miracle that everbody survived the impact and the fire." said Bill Davis, an assistant Denver fire chief assigned to the airport.

There were no fatalities but some passengers suffered broken bones and two were in critical condition with fractures following the accident on Saturday evening.

"By the time the plane stopped we were burning pretty well and I think I could feel the heat even through the bulkhead and window," said Mike Wilson, a passanger.

"I made for the exit door as quickly as I could, fearing the right wing might explode from the fire. Once out, I scrambled down the wing."

Reason for this accident could be snowy adn cold weather at the time of accient.

Email ThisBlogThis!Share to TwitterShare to FacebookShare to Pinterest
Tags: airplane