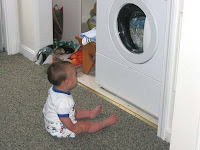 A 4 year old girl died after after climbing into a washing machine and tumbling inside for several minutes when her 15-month-old brother turned it on by accident.

The investigators in the Orange County, California, indicated that Kayley Ishii was thrown around inside the machine for about two minutes.

A sheriff's department spokesman said controls to the machine were around 20in off the ground, which was unfortunately close enough for the boy to reach. The start switch was a simple push button.

Dr. Jim Keany, an emergency room physician at Mission Hospital and CHOC at Mission, was not the attending physician on the girl's case but said it is general practice to work on a child more intensely than an adult.

"Children can be very resilient and bounce back," he said.

In his 17-year medical career, Keany has never seen a washing machine accident like the one reported in Mission Viejo. He also wondered how a front-loading washer could start with a child inside it.

“Washers and dryers have potential suffocation threats for children,” he said. “But this particular case I find highly unusual.”

Keany added that a recent article in the British Journal of Medicine cited 496 washing machine accidents causing injuries, but fewer than 10 percent of them required admission to a hospital.

Investigators have talked to Ishii's mother, Mayumi Ishii, regarding the details of the death, he said.

Ishii told investigators that she didn't know why Kayley climbed inside the front-loading washing machine.

“They don't know if they were playing or what,” Amormino said. “It is very unusual.”

Email ThisBlogThis!Share to TwitterShare to FacebookShare to Pinterest
Tags: children