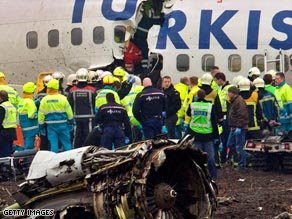 The Turkish Airlines Boeing 737-800, which had 127 passengers and seven crew members according to the airline, broke into three pieces on impact in a field near Schiphol Airport.

It is too early to determine the cause of the crash, Bezuijen said.

A news photographer at the scene said she saw an unknown number of bodies lying under a white blanket, Maaike Voersma, a journalist with Dutch newspaper De Pers, told CNN.

A passenger on the plane who spoke to Turkish network DHA said he saw injured people trapped and squeezed between the seats when he walked off the plane.

Flight 1951, which originated from Istanbul, Turkey, was trying to land at Schiphol when it went down at about 10:40 a.m. local time, Dutch airport officials said.

At least three crew members were among the dead.

"There are still three crew members in the cabin," said Bob Steensma of the Dutch Justice Department. "I'm sorry to say they are dead. We leave them there because we have to investigate the cockpit before we take the cockpit apart."

All the passengers, however, had been removed from the plane as of about 5 p.m. (11 a.m. ET), officials said. Roads around the crash site had been blocked to traffic.

Six people were critically injured, Ineke Van Der Zande of Amsterdam Emergency Services told reporters at a briefing. Twenty-five passengers were severely injured, she said, and 24 others were lightly injured. The conditions of the other 31 people were not immediately known, she said. Some 60 ambulances transported 84 people to 11 hospitals throughout the region, she said.

Witnesses said they saw the nose of the plane pitch up suddenly before the crash, according to RTL journalist Greg Crouch.

Pictures from the scene showed the plane broken in three pieces. One tear was in front of the wing, splitting the "Turkish" logo in two, and a larger tear was farther back along he fuselage.

Most of the injured were seated toward the back of the plane, which sustained the most damage, a passenger on the plane told Turkish station NTV. Many of the passengers simply walked off the plane through the cracks in the fuselage, witnesses told NTV.

Images from the scene showed medics treating passengers on the ground next to the buckled hulk of the plane, while firefighters and police examined the aircraft. Photo See rescuers attend the crash scene »

Emergency exits were wide open and there was no signs of fire damage to the fuselage. Also visible was one of the aircraft's engines, apparently separated from the shattered remains of one of the wings.

The plane landed in a flat farmer's field near the airport, RTL journalist Greg Crouch told CNN. He said the weather at the time was partly sunny with no wind or rain.

Witnesses said they saw the nose of the plane pitch up suddenly before the crash, Crouch said.

A bank manager who was a passenger on the plane told NTV that there were no emergency announcements. The crew's last word to the cabin was an announcement to fasten seatbelts and prepare for landing, the bank manager said.

He said he felt the pilot giving more power to the engines before feeling "turbulence," then a sudden drop. He described the crash as similar to a sudden impact that was over in a matter of seconds.

Survivors of the crash were taken to Schiphol airport by bus, journalist Elouise Defauwe of the newspaper Hetparool told CNN.

The U.S. National Transportation Safety Board said it is sending a team of investigators to Amsterdam to assist in the crash investigation.

Kieran Daly, of Air Transport Intelligence said the impact had been severe but it could have been survivable because of the lack of fire. He added that there had been vast improvements in the materials used to build airplanes, meaning they did not burn as easily.

Daly also said that the Boeing 737-800 is a reliable aircraft that has been successful and safe in service.

"They really are pretty much state-of-the-art airliners with every imaginable technical benefit the industry has come up with over the years," Daly told CNN.

"You would be optimistic that they would be quite survivable in an accident." Daly said the Turkish aviation industry has a "pretty good record" of safety, and that Turkish Airlines, the national carrier, has a "very good record."

Turkish Airlines said it has 52 Boeing 737-800s in its fleet. They can carry as many as 165 passengers each, the airline said.

The airline's last accident was of a small commuter jet in 2003, he said. It was a fatal crash that happened at a remote airfield in eastern Turkey, he said. "Their mainline operation is safe," Daly said. "Their pilots are well thought of."

The last accident at Schiphol Airport happened in December 2003 when an EasyJet flight carrying 103 passengers to London collided while with a lamppost while taxiing during icy conditions, according to Aviation Safety Network's Web site. The crash caused significant damage to the aircraft, but no one was killed.

The last fatal incident at the Amsterdam airport happened in April 1994 when a KLM aircraft crashed shortly after takeoff as it tried to return to Schiphol. Three of the 24 passengers and crew members on board were killed.

Email ThisBlogThis!Share to TwitterShare to FacebookShare to Pinterest
Tags: plane