Two people were killed in a bizarre accident when a truck tumbled 14 feet over a Woodall Rodgers Freeway ramp and crushed a car passing underneath, police said.
Ashley Parra, 22 year old UNT student, was driving at job on same route as every day, when 18-wheeler fell onto her car.

Authorities said it appeared the truck's load, a large amount of metal pipe stems, may have shifted and led to the deadly accident.

"I've never seen anything like it," Dallas police Sgt. Gil Cerda said. "Another vehicle falling on your vehicle as you're traveling is just unbelievable."

A waitress at Hooters, Ashley Parra was only a half mile from her work when the truck drove off the ramp.

"She had good grades, she had a lot of potential and she was going to grow up and be somebody someday, and now she's gone," Ms. Castro said of Ms. Parra, a student at the University of North Texas.
Parra was in her first semester at UNT and was studying to become a teacher. Before that, her grandmother said she spent two years studying law at Southern Methodist University.

Police said they were investigating the possibility that speed was a factor in the crash.
"Obviously he was going too fast for his load," Sgt. Harris said. "It doesn't matter what his speed was, it was too fast to go around that curve." 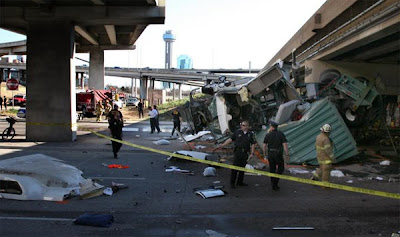 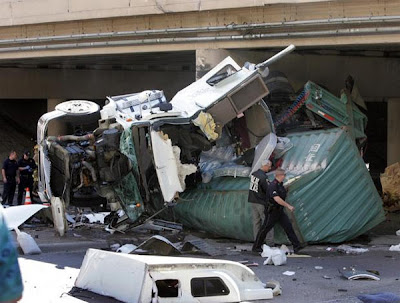