The skydiver who fell 3,000ft to earth and lived to tell the tale


Whitchurch, Shropshire UK - A skydiver was recovering in hospital yesterday after plummeting 3,000ft on to the roof of a hangar.

Paul Lewis, 40, was in a 'stable but critical condition' after spiralling out of control when his parachute failed to open properly.

Miraculously, a friend who saw the incident said his injuries were not life-threatening and he had broken no bones. 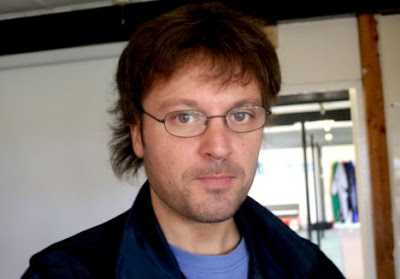 
Mr Lewis, a freelance cameraman, was filming a parachutist making her first jump from 10,000ft when he got into difficulties.

His main chute failed to open at 3,000ft. The reserve chute opened at 2,000ft, but a problem caused him to spiral out of control from 1,000ft with the canopy only partially opened.

However, rather than slamming into concrete, he fell on to the relatively flexible hangar roof near the Tilstock Airfield at Whitchurch, Shropshire.

The parachute became snagged on the 30ft-high pitched roof, made from corrugated metal, and stopped him plunging to the ground - saving his life in the process.

It took nearly an hour for a fire engine with a high enough cherry picker to enable paramedics and firefighters to reach him on Friday afternoon.

He injured his head and neck and was airlifted to the University Hospital of North Staffordshire, in Stoke-on-Trent. Doctors have operated on his injuries.

Colin Fitzmaurice, who runs the Parachute Centre at Whitchurch where the incident happened, said Mr Lewis was lucky to have survived the fall.

'I think it was the flexibility of the hangar roof that broke his impact,' he said. 'He did hit it hard, but was using a full-face helmet which also protected him.

'He wasn't saying much when we got to him, he was in a lot of pain.

'But he doesn't have any broken bones and his condition is not life-threatening. We are sure that he will make a full recovery.'

Commenting on Saturday, Mr Fitzmaurice said: 'I watched him fall and as soon as I saw the parachute spiral I knew something was wrong.

'He is incredibly lucky. If he'd fallen 10ft either way he would have landed on concrete.

'I went to see him earlier today and he was in good spirits.' 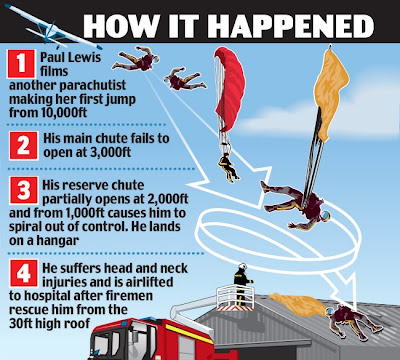 Mr Lewis, a bachelor, is an experienced skydiver who has clocked up more than 600 jumps in 20 years.

Mr Fitzmaurice said: 'I've known him ever since he's been jumping. This happens once in a while.

'The sport is relatively safe and the malfunction that occurred would only happen on an experienced jumper's equipment.'

Ambulance spokesman Suzie Fothergill said: 'Using specialist equipment and with the assistance of the fire service paramedics, we brought the man down to safety from the roof.

'He was treated on scene for potentially serious head and neck injuries.

'He was fully immobilised at the scene before being conveyed, via air ambulance, to hospital for further assessment and treatment.

'A trauma team was on standby at the hospital which had been prealerted to his arrival.'

'My best wishes go out to the skydiver concerned, I wish him a speedy recovery,' said a user called TomU.