The 10 Most Terrible Amusement Park Accidents 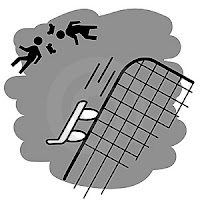 A day at places like Disneyland and Six Flags is usually a mix of endless painful waiting and a few short minutes of pleasure; kind of like sex. Occasionally though, there is the all out disaster of a time where the machinery goes crazy and someone loses a limb or dies; also not unlike sex. Here's a list of the most horrible amusement park accidents that have ever happened while onlookers take out camera phones instead of helping.

A young girl goes to Six Flags Kentucky and takes a ride on the Superman drop.
00:50 for the news report and the girl describing exactly what she saw and what happened as the accident happened, which is much more disturbing than any live video footage could be.
Here's what happened:
Before the ride takes them to the top, she and her friends heard a cable snap, they looked up and saw the cables coming from all parts of the ride, whipping around and injuring their faces.
This was only 20ft off the ground.
As the ride started to take them higher, they started seeing black smoke and smelling burned rubber.
The girls all yelled "stop the ride!" repeatedly, cables all over them, even around their necks.
When the girls landed on the ground, one of them smelled burning flesh. It was her severed feet.
One of the girls ended up losing both feet and half a leg to this accident.

Let’s go back in time to a simpler era where music was analog, clothes were shitty, and an indoor Canadian roller coaster went flying off the tracks and killed three people. Three people died in this accident where the exact thing everyone is scared will happen on roller coasters happened: the final car flew of its hinges and was dragged, careening all over the tracks before anyone (finally) pulled the emergency brake.
Skip to 1:49 to see the injuries of the one guy in the car who survived, only to be crippled by memories.
Skip earlier, to 1:46 to see the park guy describing the safety of the roller coaster and looking a lot like the father in Happiness.
This also serves as a kind reminder never to get a tombstone with a picture of yourself on it, as your "style" may not live as long as your memory.

3. In Russia Ferris Wheel Rides You

Not only does this kid jump a 6ft fence to an abandoned ferris wheel, he also managed to easily turn it on and get a ride. Halfway through his hijacking he decided he didn’t like the chair he picked, so he switched, very unsuccessfully.
As he dangled 45ft (for all you rubes out there, you're welcome for that non-metric conversion, as they describe it in "meters" in the video) above the pavement, a crowd gathered. A crowd of people that could have helped, but instead got out their camera phones.
Turn to 0:44 for footage of the dangling child and a description of the people who were, thankfully, there, and ended up picking up a video phone when they could have easily been helping the poor boy NOT plummet to his death.

A tragic accident occurred in a Georgia Six Flags when a boy jumped two fences clearly marked "Do Not Enter" to retrieve a hat he lost on the ride, but ended up losing his entire head in the process.
The bottom part of the ride decapitated him while he was standing up. No news on whether or not he actually found his hat.

September 5th, 2003. The happiest place on Earth turned into a horrible nightmare for a 22 year-old male named Marcello Torres. About 1/3rd of the way through the ride, it made a sharp right turn, and part of the train came off the hinges.
This forced part of the locomotive-shaped ride to wedge into the tracks, stopping the train completely, and darting like a giant spear through Marcello Torres' chest and head.
Skip to 1:00 for a visual description of how the accident went down, including pictures courtesy of the State of California.
Please excuse the voice overs from the ride. They get pretty loud, and like on the actual ride, are pretty annoying.

At a Chinese theme park, a high-flying swing ride came off its hinges, seriously injuring many people who were riding it.
Maury had a correspondent on giving us the play-by-play, although she does seem oddly self-righteous, and slightly aroused, about the whole thing, she shows us the right clip repeatedly. This woman freaks us out.
Additionally, thanks Maury, for using clips like this to gain rubberneck viewership for years.
Bonus: how the hell was this video in an episode about "sex secrets"?

There’s no description as to how this rider managed to get out of his seat, but he did, and then resists help from attendants and park goers alike. The man is so frozen in fear that he can't move enough to reach his hand out for the crew who is trying to help him.
Skip to 0:30 for the fall, and 0:55 to see how many workers it took to get the idiot down from the lower scaffolding after her clung to it for dear stupid life.
The best part about videos like this is moments like 00:38 when the voice over artists is trying his hardest to seem concerned and impartial, but then says things like "watch again" before showing you the accident for the 6th time.

There may not be any audio in this clip, but here’s the play by play. As the ride gets going, the cable that pulls the ride snaps, and the whole line of cars slams back at the starting position, causing whiplash and, ostensibly, a lot of people who will never visit an amusement park ever again.
Two riders were injured in this accident.
The reason this is one of the most horrible things that can happen to you, is that, once again, it happens at the very beginning of a ride.
The fact that you're on a roller coast of any kind defies death just a little bit, but when that shred of safety and confidence you feel is stripped away from you, the next few moments capture a point in someone's memory when they adequately, terrifyingly and appropriately fear for their lives.

This is the intermission from all of the death and maiming, while still staying on topic. This is one of the few rare times where being fat was actually an asset to someone's life, as a thinner person would have dropped right through the wonky harness on this ride.
On the other hand, it could have been his massive bulk and "people from the movie Wall-E"-shaped physique that didn't allow the harness to work correctly on him.
As you decide, watch this kid scream like an adorable little kid-piggy, and laugh at his expense (because he was FINE), like his mother did.