For generations, it was the fastest ride around. Trains could achieve speeds of over 75 miles an hour by 1829 and for some passengers that factor alone made train travel a terrifying experience. An unlucky few never reached their destination, and some poor souls perished in such a spectacular manner they arrived at a special place in history. 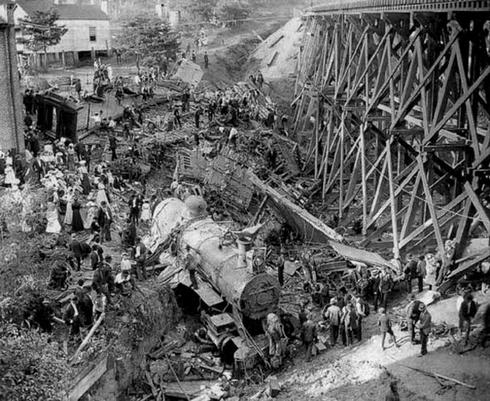 1. The First Time wasn’t the Charm

In July 31st of 1815 Philadelphia (UK) was abuzz with excitement. An experimental railway locomotive known as Brunton’s Mechanical Traveller was due to make its debut appearance. There were no tracks at this point only excited townspeople and a public industrial waggonway for the device to run on. This particular engine also known as the Steam Horse moved along on mechanized feet rather than wheels, but this wasn’t the machine’s only problem. Running on steam it needed a huge boiler and the kinks of this system for the purposes of locomotion hadn’t yet been worked out. The boiler blew killing at least 16 of the spectators and dimming the hopes of inventors everywhere.

2. Nope, still not quite right

The Stephenson’s Rocket was supposed to take the steam locomotive to the next level with a 0-2-2 wheel arrangement in 1829. While it did out perform all the other locomotives of the time on the opening day ceremony in Liverpool it demonstrated its ability to be a faster better machine of death when it crushed and killed spectator William Huskisson. A member of Parliament Huskisson was a well known luminary of Liverpool and a supporter of the new technology which dealt him the fatal blow.

3. Going this fast what can go wrong?

Tragedy struck England again when at Sonning Cutting nine passengers were killed and seventeen were injured when a Paddington Bristol train running in heavy rain either hit or was struck by a landslide. Some of the carnage might have been caused when the heavy freight being carried by the rear cars picked up momentum from the weight crushing the passenger cars to the front. Many train companies began placing passenger cars to the rear of the train from this point on.

Initially the steam engines only produced speeds of 25 miles per hour, but as time went on they went faster and faster, and became more popular. Stopping became more difficult as the technology for braking tried to keep pace, while more trains traveling across country began crossing paths. Of course, there methods in place to keep them from crashing, but as speeds picked up they did occasionally meet, and a real tragedy was inevitable. On July 17, 1856 the day was sunny and warm in Fort Washington Pennsylvania U.S.as two North Pennsylvania Railroad trains steamed toward each other. One train carried freight, but the other a passenger train was carrying 1,500 Sunday school children happily anticipating a picnic. On impact the passenger train’s boiler exploded. The train derailed sending some passengers flying out of the windows along with debris from the crash. After the first few horrifying minutes of the crash the air was soon filled with screams and wails of the dozens who lay stricken and bleeding on the tracks. 59 passengers were killed instantly and the death rate climbed as others succumbed to their injuries. The Great Train Wreck of 1856 as it came to be known would have one more death although this one would be tragic in its preventability. The passenger train’s conductor took his own life, perhaps believing others blamed him for the crash. It was later proven he was not responsible for the accident.

The worse wreck in Canada’s history to date occurred on June 29, 1864. A train carrying immigrant workers to a job site failed to brake fast enough for an open swing bridge and fell into the Richelieu River. 99 were killed including the fireman. The engineer claimed not to have seen the signal.

6. God Bless us everyone!

On June 9, 1865 the Staplehurst station was in the process of being renovated and according to later investigation there was a less than professional running of things in the confusion and heat of the extra work. Whatever caused the error the foreman wasn’t expecting the Folkestone Boat Express to pull into the station when it did, and the two rails of the track were still not in place as it steamed toward the station. The foreman raced to give warning, but there wasn’t time for the train to brake. There also should have been other precautions taken to safeguard the stopping of a train, but these were missing and the train even at full brake was at 30 miles per hour when it hit the bridge just before the station where the tracks were missing. The engineer and fireman were able to get most of the cars to the other side, but the last car broke through the timber baulks and tumbled down into the River Beult pulling in several other cars along with it. Stoves in several of the cars used for warmth caught on fire further bringing up the count of death and injury. In total 50 died over 40 more were hurt. Among the survivors was a terribly shaken Charles Dickens, who was affected by the accident for the rest of his life. He was terrified of traveling by rail after this point on and wrote the spooky ghost story “The Signal Man” no doubt in response to his involvement in the incident. He died five years to the day after the accident occurred.

A strange accident in that there seemed to be no warning occurred in Bangor Maine on August 9th 1871 when a train just out of the station crashed through a bridge. 19 passengers and the crew were killed.

8. Holding out for a Hero

Casey Jones probably never dreamed of being either famous or a hero yet in one moment he went from an unknown locomotive engineer to an American legend in a few terrible minutes.

That didn’t mean that Casey wasn’t popular in some circles during his life time and career. The father of three and a devoted family man he had moved up in his profession quickly as his dedication was well know. People in the vicinity knew Casey’s distinctive way of using the train’s whistle and he managed to keep to such an exact schedule folks also knew they could set their clocks by the engineer.

His reputation was enhanced when he managed to crawl to the front of the engine car and snatch up a small child who’d wandered on to the track. She was standing frozen in terror as the train loomed toward her when the engineer perhaps thinking of his own children risked his life to save hers.

Casey was transferred to Memphis and given a Rogers steam driven 4-6-0 train known as Ole 382. This model was the fastest of the time and his skills would be needed. Casey took the southbound No. 1 route on the evening of April 29, 1900 taking over for another engineer who was feeling ill. It was a raining night, but since steam engines were actually easier to run in those sorts of conditions Casey was making good enough time to make up for the change during shift. The young engineer and father pulled out of Goodman running only five minutes behind. Having only 27 miles still to go Casey Jones might have been thinking of being able to go home have a bite to eat and finally getting sleep. What he couldn’t know was that a double-header freight train the Number 83 and another long freight train had needed to pass on the same track and Number 72 still had overlapping cars on the track which Casey Jones was steaming toward.

For his part Casey was still working to make up time and was traveling at 75 miles per hour down the foggy, raining track. By the time Jones and his fireman were made aware of their peril it was too late. Telling his fireman Sam Webb to jump for it Casey Jones reversed the throttle and slammed the airbrakes into an emergency stop. He managed to bring the speed of the train down from 75 mph to 35 mph in an almost miraculous few minutes, but his heroism cost him his life. While his passengers escape the accident with only injuries the young engineer was killed. As legend has it when they found Casey Jones his hand was still on the brake.

Even as the train company went on to blame Casey Jones the fame of his bravery grew in legend and eventually in song.

9. Neither rain, nor snow will stop the U.S. Mail, but crashing?

He was no Casey Jones, but 33 year old Joseph A. Broadey who for some reason went by the name ‘Steve’ was a married man who needed to keep his job. When on the September 27th 1903 he was given orders to take Ol’ 97 with several mail cars and clerks it was made clear to him to get it back on time. The Fast Mail had a reputation of never being late and Steve knew that despite the fact he was going 166 miles to Spencer from Monroe through rough terrain it would mean his position if he didn’t make it on time. The problem with the Monroe to Spencer route was it involved long combinations of rolling hills, valleys, tight curves and steep grades. Every few miles Steve must have seen the signs warning him to slow down, but he stuck to his orders and paid them no heed. Going an estimated 80 miles per hour Steve Broadey pushed the train’s descent down the heavy grade which ended at the 75-foot high Stillhouse Trestle a narrow bridge over a creek called Cherrystone. At the end of the incline the track curved onto the bridge, but Steve lost control and the 97 jumped the tracks plunging the train into the ravine below. Nine of the crew and mail clerks were killed including Steve Broadey. The Southern Railway Steve’s employer blamed him denying they had given orders to speed to stay on schedule.

Steve’s plight became a ballad as well only this legend was more a warning of greed and corporate misdeeds than heroism. The Wreck of the Old 97 was sung by many balladeers including G.B Grayson, Henry Whitter, Vernon Dalhart, David Holt, Flatt and Scruggs, and Johnny Cash.

In many countries even today trains are a good source of fast travel or just recreation. For some trains can still prove deadly as in June 28th 2000 when 13 children who were ‘surfing’ or clinging to the side of a train traveling through Padang were killed when the fast moving freight derailed.