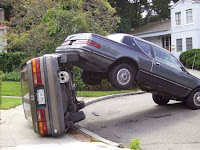 Here are some incredible, but true statements which all appeared on claim forms submitted to car insurance companies by policyholders who had been involved in car accidents.

* The guy was all over the road. I had to swerve a number of times before I hit him.
* I was sure the old fellow would never make it to the other side of the road when I struck him.
* The pedestrian had no idea which way to run as I ran over him.
* The car in front hit the pedestrian but he got up so I hit him again.
* I saw a slow moving, sad faced old gentleman as he bounced off the roof of my car.
* A pedestrian hit me and went under my car.
* I saw her look at me twice. She appeared to be making slow progress when we met on impact.

Accidents with other vehicles

* The other car collided with mine without giving warning of its intention.
* When I saw I could not avoid a collision I stepped on the gas and crashed into the other car.
* The accident occurred when I was attempting to bring my car out of a skid by steering it into the other vehicle.
* I was backing my car out of the driveway in the usual manner, when it was struck by the other car in the same place it had been struck several times before.
* The car in front of me stopped for a yellow light, so I had no choice but to hit him. (She pushed him through the intesection)

* Coming home I drove into the wrong house and collided with a tree I don't have.
* I told the police that I was not injured, but on removing my hat found that I had a fractured skull.
* I pulled away from the side of the road, glanced at my mother-in-law and headed over the embankment.
* I thought my window was down, but I found it was up when I put my head through it.
* As I approached an intersection a sign suddenly appeared in a place where no stop sign had ever appeared before. I was unable to stop in time to avoid the accident.
* In an attempt to kill a fly, I drove into a telephone pole.
* I saw two kangaroos having it off in the middle of the road. So I hit them, which caused me to ejaculate through the sunroof.
* The telephone pole was approaching. I was attempting to swerve out of the way when I struck the front end.
* The claimant had collided with a cow. The questions and answers on the claim form were - Q: What warning was given by you? A: Horn. Q: What warning was given by the other party? A: Moo.

Who is to Blame?
* No one was to blame for the accident but it would never have happened if the other driver had been alert.
* I didn't think the speed limit applied after midnight.
* I was going at about 70 or 80 mph when my girlfriend reached over and grabbed my testicles so I lost control.
* The accident was caused by me waving to the man I hit last week.
* The accident happened when the right front door of a car came round the corner without giving a signal.
* I had been driving for forty years when I fell asleep at the wheel and had an accident.
* I left for work this morning at 7am as usual when I collided straight into a bus. The bus was 5 minutes early.
* An invisible car came out of nowhere, struck my car and vanished.
* I knew the dog was possessive about the car but I would not have asked her to drive it if I had thought there was any risk.
* The accident happened because I had one eye on the truck in front, one eye on the pedestrian, and the other on the car behind.

Email ThisBlogThis!Share to TwitterShare to FacebookShare to Pinterest
Tags: funny