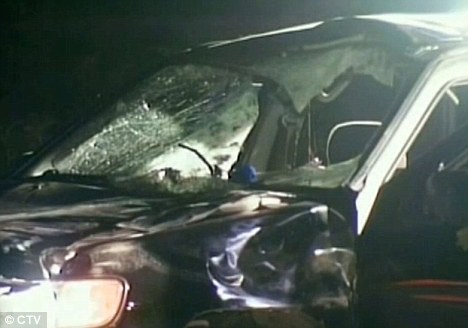 A man and woman were killed in a bizarre motorway accident when an airborne 21stone black bear smashed through their windscreen and exited through the back window.

Their car was travelling east on Highway 148 just outside Quebec, Canada, at around 10.30pm on Monday night.

A vehicle travelling in the opposite direction hit the bear, sending it flying into the air across the other lane.

It was then struck by the second car, killing the 25-year-old female driver and her friend Steven Leon, 40, who was sat in the back seat.

The driver, a student dietitian who was due to graduate in September, has not been named at the request of her family.

Her boyfriend, 28, who was in the front passenger seat, was taken to hospital with injuries to his upper body but they are not thought to be life-threatening.

The occupants of the vehicle that originally hit bear were unharmed, though the bear was killed.

'Add the weight of the bear, about a 300-pound (136Kg) bear, plus the speed of the vehicle, it's a deadly impact,' Constable Martin Fournel, a spokesperson for MRC-des-Collines-de-l'Outaouais police, told CTV Ottawa.

Police investigating the very unusual accident near the town of Luskville say it is the first time anyone has died in a road accident involving a bear.

However, locals said it was the second such accident in recent weeks, but that no-one had been injured in the previous incident.

They believe the bears are being drawn to the motorway by a bear bait station that has been set up nearby. Bear-hunting is illegal in Quebec but people are free to lay bait.

'I don't have any opposition to people hunting bears,' said resident Sheila McCrindle, 'but they are bringing bears in from all over, and there's a playground here and a highway here and there is lots of houses around it, so maybe not a good place for this kind of activity.' 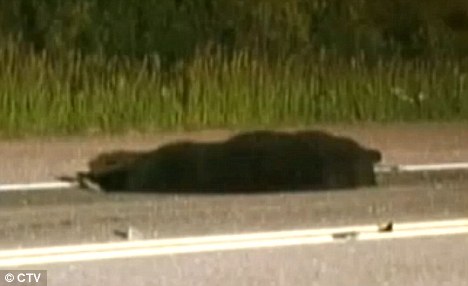 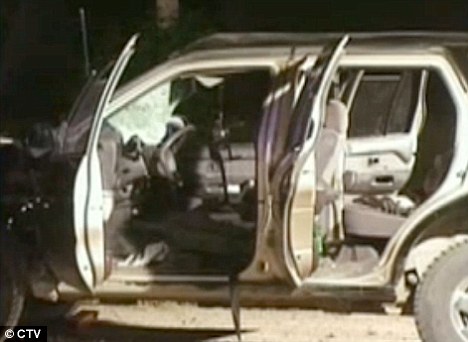