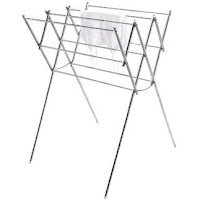 A father died when he became trapped by a clothes horse as he hung his washing out to dry.

Brian Depledge, 38, was asphyxiated after tripping and falling backwards into the plastic drying rack, trapping his neck between its rungs, an inquest heard yesterday.

A shocked coroner said Mr Depledge had stood a greater chance of being killed by ‘lightning or a meteorite’.
Enlarge   Rare cause of death: Brian Depledge suffocated after falling onto an airer while hanging out washing
'Cats-cradle effect': A clothes horse similar to this one trapped Mr Depledge, whose efforts to free himself only made it tighten its grip

Father of two Brian Depledge, 38, suffocated after becoming trapped in a clothes horse similar to the one pictured

The inquest in Bradford was told how the father-of-two fell into the clothes horse after tripping over a stool, and his neck and chest became wedged in its rungs as it collapsed.

He struggled to free himself but created a ‘cat’s cradle effect’ that only made the compression worse, the hearing heard. The coroner, Professor Paul Marks, said: ‘I have never come across a case like this.

Brian’s was an untimely death caused by the most bizarre set of circumstances – probably rarer than being struck by lightning or a meteorite.’

Detective Inspector Mark Long said it appeared Mr Depledge had tried to untangle himself by putting his right arm through one of the airer’s segments following the accident in February.

But by pushing down on the bars it tightened the grip ‘like a concertina’, he added.

And as clothes on top of the airer were still wet, he explained, their weight would have put even more pressure on his neck.

Asked how Mr Depledge could have fallen into the drier, he suggested that it was possible he had tripped over a stool in his living room, which was found at his feet.

Dr Philip Batman, a consultant pathologist who carried out the post-mortem examination, said:  ‘Mr Depledge was found in his living room with the clothes horse on top of him and blood on his face.

He appeared to have fallen and got stuck between the rungs of the airer.  The drier gave way, but Brian’s struggles to release himself would have resulted in more suffocation.

‘His lungs were congested  with excess fluid, which is  consistent with asphyxiation as a cause of death.’

Mr Depledge leaves behind an 18-year-old daughter, Shawni, and an 11-year-old son, Ryan.

His daughter said: ‘He was a lovely person, very easy-going. He was meant to be giving me away at my wedding in April, so it was hard to get through the day without him. I still know he was there for me on the day.’

Other family members added that Ryan is finding it hard to come to terms with his father’s death.

The youngster’s grandmother, June Evans, said: ‘I don’t think it’s really sunk in with him. He keeps asking “When can I see my dad?  I want to see my dad”.

‘I just tell him, your dad is here with you in your heart and he always will be.’

Mr Depledge was unemployed and estranged from the mother of his two children.

The coroner recorded a verdict of accidental death.

Email ThisBlogThis!Share to TwitterShare to FacebookShare to Pinterest
Tags: bizarre