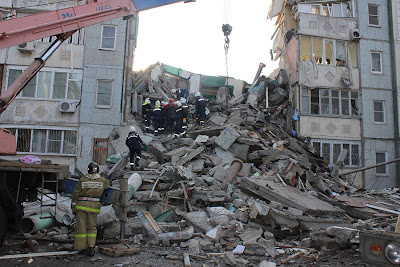 Rescue workers were searching through the rubble, and officials said at least 11 residents of the building are unaccounted for.

The explosion occurred Monday in Astrakhan, a city 800 miles (1,300 kilometers) southeast of Moscow.
A spokesman for the regional emergencies ministry, Oleg Grekov, told the ITAR-Tass news agency two bodies were pulled from the rubble late Monday.

Explosions of gas canisters in Russian homes and businesses are common.

Email ThisBlogThis!Share to TwitterShare to FacebookShare to Pinterest
Tags: crash 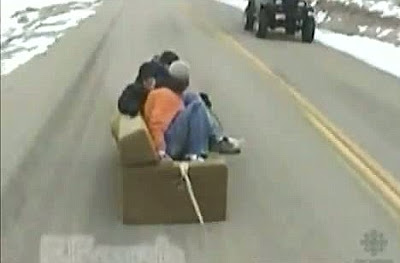 A 22-year-old man has died after crashing into an oncoming car while 'couch-surfing' along a country road.

François Hallé was riding on the sofa, which had been placed on top of a sled and tied to the back of a van, when the driver lost control and forced him into the opposite lane.

A 21-year-old man has been accused of dangerous driving, causing death, fleeing the scene of an accident and criminal negligence causing death.

Alex Labbé was formally arraigned in court in Saint-Joseph-de-Beauce, Quebec, on Monday.

Labbé was allegedly driving the van along a road in Saint-Benjamin, south of Quebec City, when the couch he was towing swerved into oncoming traffic, it was reported on CBC News.

Hallé, who died later in hospital, is believed to be the first person to be killed in the craze.

Police said Labbé was arrested at his home in Saint-Georges after apparently fleeing the scene.

Yan Laflamme, a friend of both men, told CBC News that Labbé panicked when he saw the body of his friend on the ground.

'It's not like he fled because he didn't want people to know it was him,' Laflamme added.

The stunt, known as 'couch-surfing', is popular online with more and more people posting videos showing them being dragged behind a vehicle at high speeds.

Laflamme and his friends took up the dangerous hobby after viewing it on the internet.

He said: 'It's the kind of thing that when you see it, you want to try it … we definitely like doing it; we do it often; we have a good time.'

Email ThisBlogThis!Share to TwitterShare to FacebookShare to Pinterest
Tags: bizarre